On January 12, 2010 an earthquake ravaged Haiti (USGS, 2010). In the aftermath of the earthquake, a team of professors and students from Purdue University, the University of Washington, and the University of Kansas went to Haiti. The goal of the team was to evaluate the Priority Index proposed by Hassan and Sözen (1997).

The Priority Index is a measure of the vulnerability of buildings to earthquakes, and is calculated as follows:

The team took 6,526 photographs of 183 structures. These building were constructed using reinforced concrete and concrete masonry units. This database contains these photographs and all other information collected in the field.

Thirteen buildings were not surveyed completely because they were not deemed representative. Of the 170 building surveyed in detail, 138 were located in Port-au-Prince and 38 were located in Léogâne. (O'Brien, et al. 2010) The average Priority Index for these buildings is 0.36% with a high of 2.32%, and a low of 0.06%. The number of floors ranged from 1 to 12, with an average close to 2. One hundred and sixteen buildings had 2 or fewer stories. Among them, the average Priority Index was 0.39%. Fifty one of these buildings had light structural damage, while 13 had moderate damage, and 47 had severe damage. For the 54 buildings with more than two stories, the average Priority Index was 0.25%. Of these, 21 had light structural damage, 13 had moderate damage and 20 had severe damage. 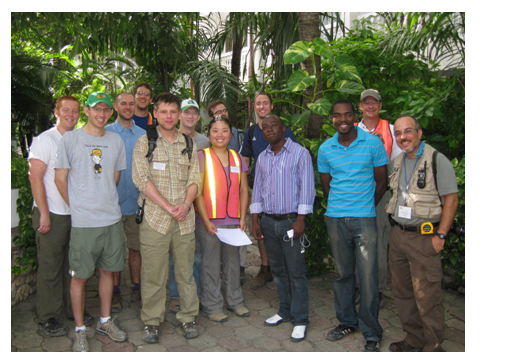